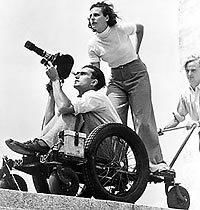 It’s one of life’s little ironies that one of the most stunning cinematic cloud sequences appears in a Nazi propaganda film.

Leni Riefenstahl’s 1935 Triumph of the Will, commissioned by Hitler to portray him as the leader destined to rebuild Germany as a great power, makes uncomfortable viewing, even as an historical document.

However, despite the appalling subject matter, students of cinema have long recognised that Riefenstahl used ground-breaking techniques, including aerial photography.

The good news is that the cloud footage, shot from a plane, comes right at the beginning of the film, so you don’t have to fast-forward your way through reels of fascist flag waving.

Our thanks to filmmaker Koldo Almandoz (member 13286), who came across the footage while researching Nazi cinema.