June 23, 2009 In Attention All Cloudspotters 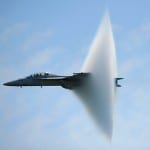 On May 23, 2009 over Wantagh, New York a cone of water vapor surrounds an F/A-18F Super Hornet airplane as it approaches the sound barrier during the New York Air Show at Jones Beach State Park.

Rings like this can form as an aircraft traveling low over the water nears the speed of sound. Pressure created by sound waves squeezes moisture from the air, creating the “artificial cloud.”