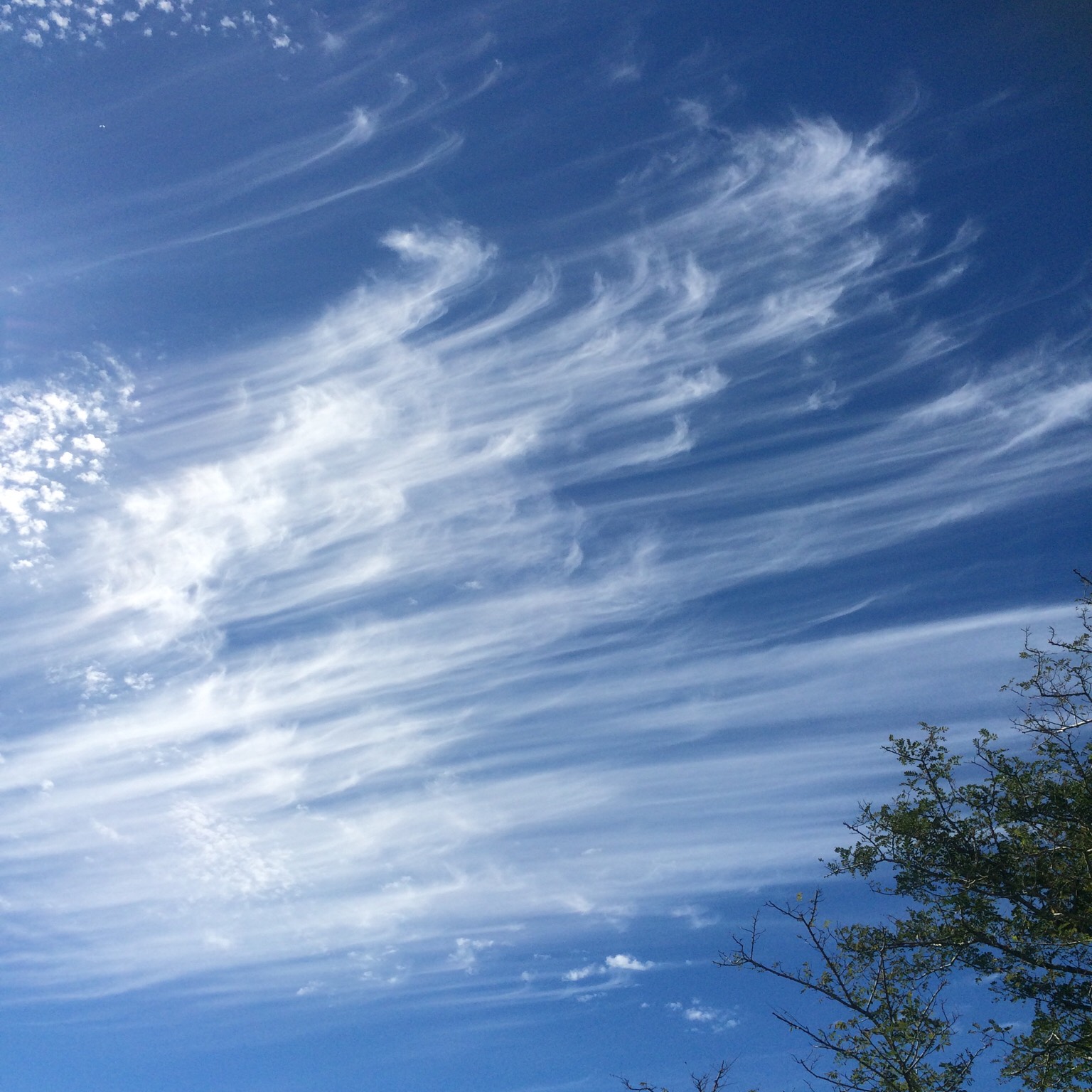 Uncinus is a species of Cirrus where the streaks of the high cloud have a hooked appearance at one end. To be a true uncinus, these hooks should look like the handles of walking sticks, and should not take the form of rounded tufts or clumps. Those would be more likely to be the floccus form of Cirrus and trails of virga falling from Altocumulus.

Described in maritime folklore as ‘mare’s tails’, uncinus have traditionally been associated with the arrival of unsettled weather. There is some truth to the phrase ‘mare’s tails and mackerel scales make tall ships carry low sails.’ The hooked ends of these clouds indicate that strong winds up at the high-cloud level vary greatly with altitude – being much faster above the cloud than they are below. Such ‘shearing’ wind conditions do indeed herald the arrival of a weather front. 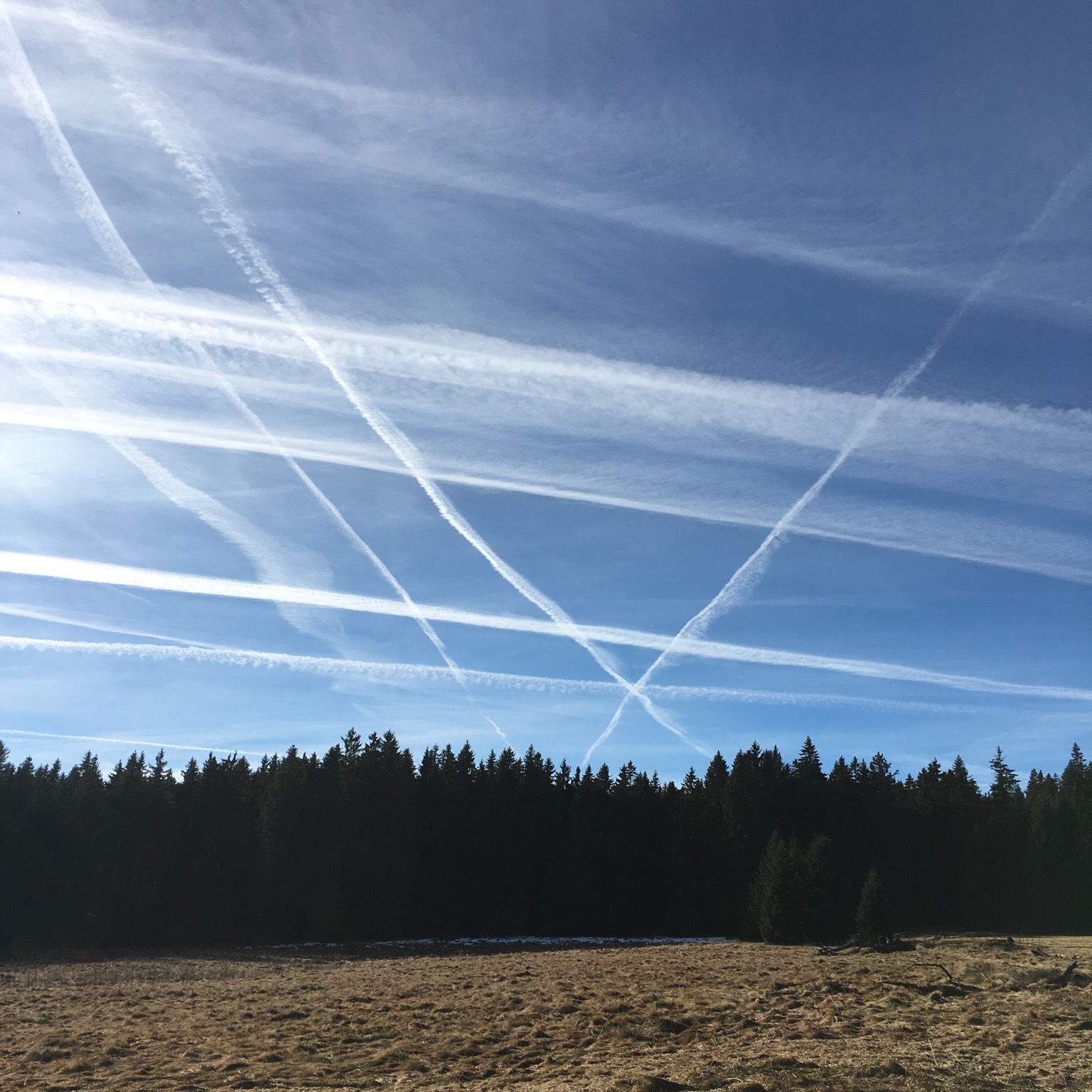 Before the start of the First World War and the advent of high-altitude flight, our skies appeared very different from the way they do today – there were no condensation trails, or contrails, which form in the exhaust of aircraft.

There’s no confusing these man-made clouds with the natural ones. Following the aircraft’s path, contrails tend to appear as long, straight slashes of white across the blue. In the vicinity of airports, however, they can sometimes form large loops, due to the stacking formation of aircraft waiting to land.

The length of time contrails remain in the sky – or indeed whether they form at all – varies greatly depending on the air conditions up at cruising altitude. When it’s cold enough and moist enough, the water vapour contained in the plane’s hot exhaust gases mixes with the very cold air to condense and form ice crystals. In some conditions, these soon evaporate. In others, they can persist for hours, the ice crystals absorbing water vapour from the surrounding air to grow in size and spread out in the high winds. In this way, contrails often encourage the formation of Cirrus, Cirrocumulus and Cirrostratus ice-crystal clouds. 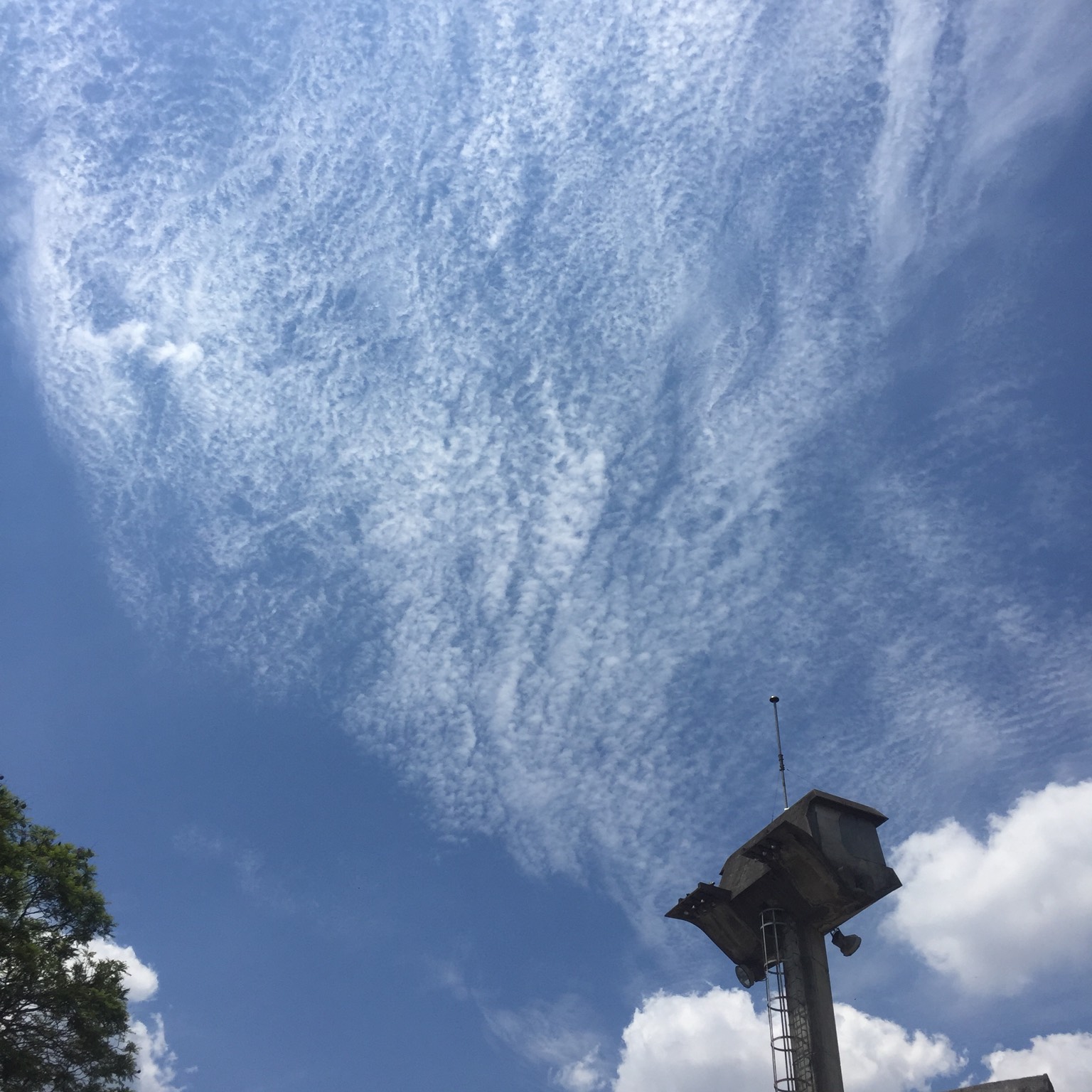 These are high patches or layers of cloudlets that appear tiny, on account of their distance from the ground.

The best way to distinguish Cirrocumulus from lower Altocumulus is the size of the cloudlets, as well as the area of the sky covered by the layer as a whole. Being such a distance from the ground (often in the region of six miles (10km)), the cloudlets of Cirrocumulus appear so small that you often have to look carefully to notice the cloud’s grainy texture. For the cloud to be Cirrocumulus, these cloudlets must appear no larger than the width of a finger, held at arm’s length, when they are more than 30˚ above the horizon.

Composed generally of very supercooled water droplets that are on the point of freezing into ice crystals, Cirrocumulus is the rarest of the ten main cloud types. When you see a layer of small cloudlets it is more typically the mid-level equivalent, Altocumulus. When Cirrocumulus is present, it doesn’t last long. The cloud soon freezes into the other high clouds, Cirrus or Cirrostratus. As a result, you’ll often find Cirrocumulus accompanied by these other high-cloud cousins. 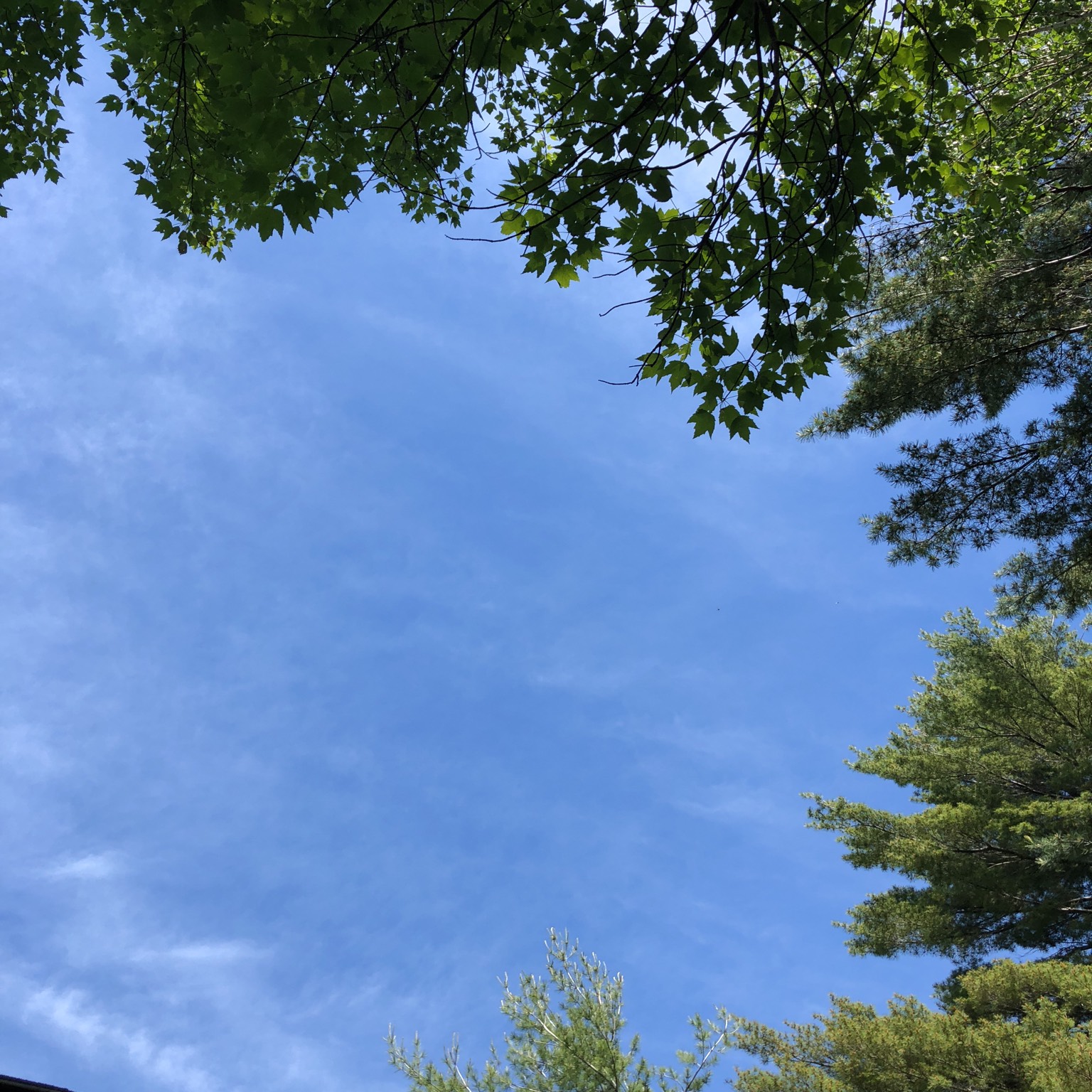 Cirrostratus is a subtle, understated cloud that can easily go unnoticed – except, that is, by CloudSpotters, keen to complete all ten of the main cloud types in their collection.

A delicate layer of ice crystals, often spread over vast areas of the sky, Cirrostratus can appear as no more than a light, milky whitening of the blue. It can sometimes look stripy or fibrous (the species known as fibratus) but more commonly lacks any variation in tone.

It also distinguishes itself as the best of the high clouds at producing the coloured arcs, rings and points of light known as halo phenomena. These can appear as the sunlight shining through a layer of Cirrostratus is refracted and reflected by the ice crystals, each of which can behave like a tiny prism. Halo phenomena certainly don’t always appear but, when they do, they can exhibit beautiful rainbow colours, and are a sure way to distinguish Cirrostratus from Altostratus, which, being lower and consisting (at least partially) of droplets, doesn’t produce them. 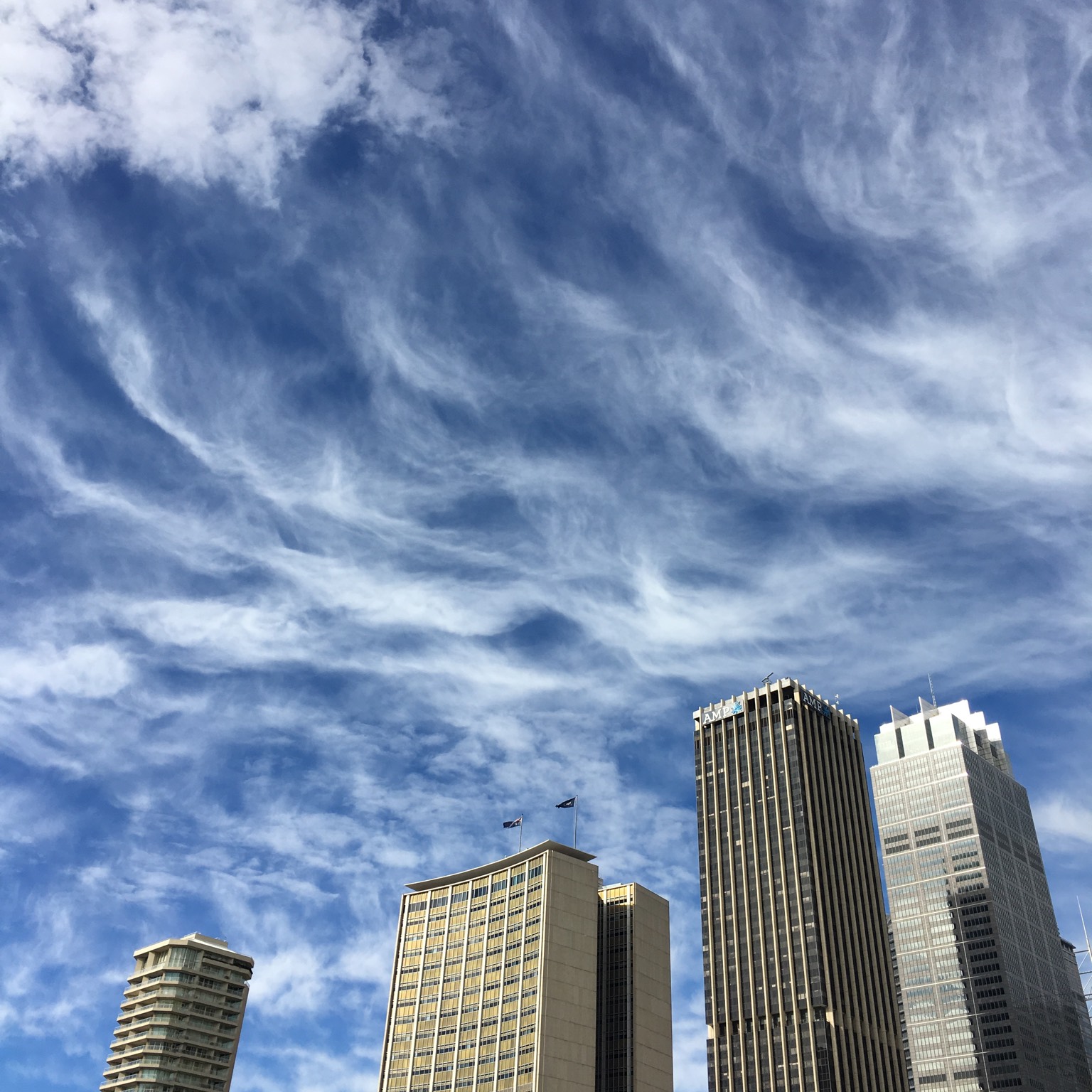 The most ethereal looking of all the main types, Cirrus clouds are also the highest – composed entirely of ice crystals. These typically fall through the high winds of the upper troposphere to appear as delicate, celestial brush strokes, known as ‘fallstreaks’.

Cirrus often look like white locks of hair (from which the Latin name is derived). Cirrus clouds thickening and spreading across the blue can be the first signs of moisture developing at high altitudes, indicating the start of a common cloud progression that leads to Nimbostratus and rain or snow in a day or so.

Apart from when it is very thick, and known as Cirrus spissatus, Cirrus can sometimes refract and reflect the sunlight to produce coloured arcs and rings known as halo phenomena.