Altitude: Can appear for all altitudes of the Sun/Moon 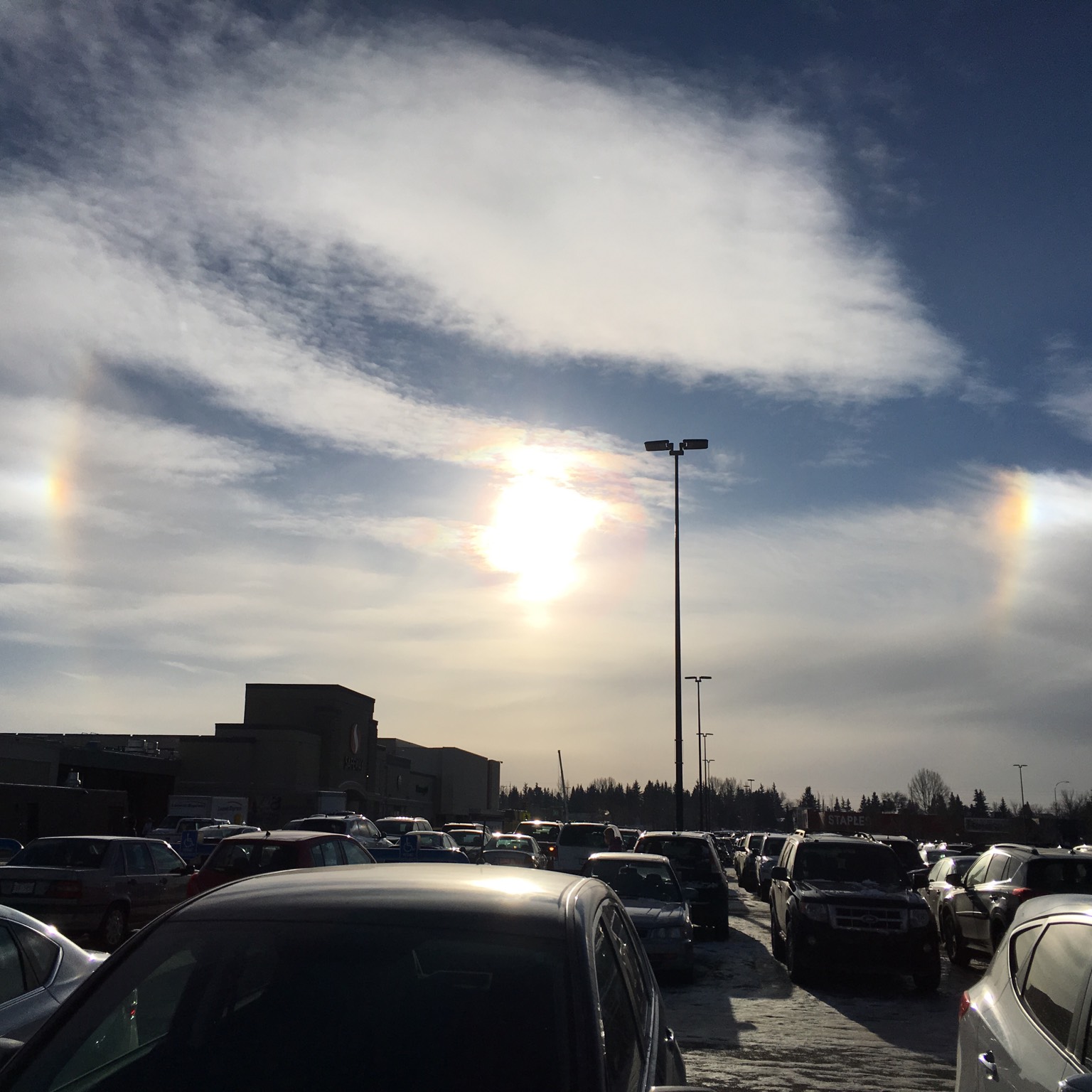 Also known as ‘mock suns’ and ‘parhelia’, sun dogs are large spots of light that can appear on one or both sides of the Sun, and at the same level as it. The second most frequent halo phenomenon after the 22-degree halo, sun dogs appear on about 70 days of the year (over Western Europe). They are formed as sunlight is refracted through the ice crystals of thin layers of high clouds, such as Cirrus, Cirrostratus and Cirrocumulus, or those of the ground-level ice-crystal cloud, diamond dust. The distance from the Sun of both spots of light is equivalent to the outstretched span of a hand held up at arm’s length. Sun dogs are brightest when the Sun is low, and visible only when it’s below about 40˚ from the horizon. If the cloud isn’t in the right parts of the sky, just one sun dog appears.

CloudSpotters should learn to recognise the sky that tends to produce sun dogs, as well as the other halo phenomena. Paying careful attention not to stare into the Sun, as it can damage your eyes, scan the blue for light effects when the sky first pales with the subtle veil of ice-crystal clouds. Once these high clouds have become white enough to be noticed by the riffraff, they’re generally too thick to produce sun dogs. 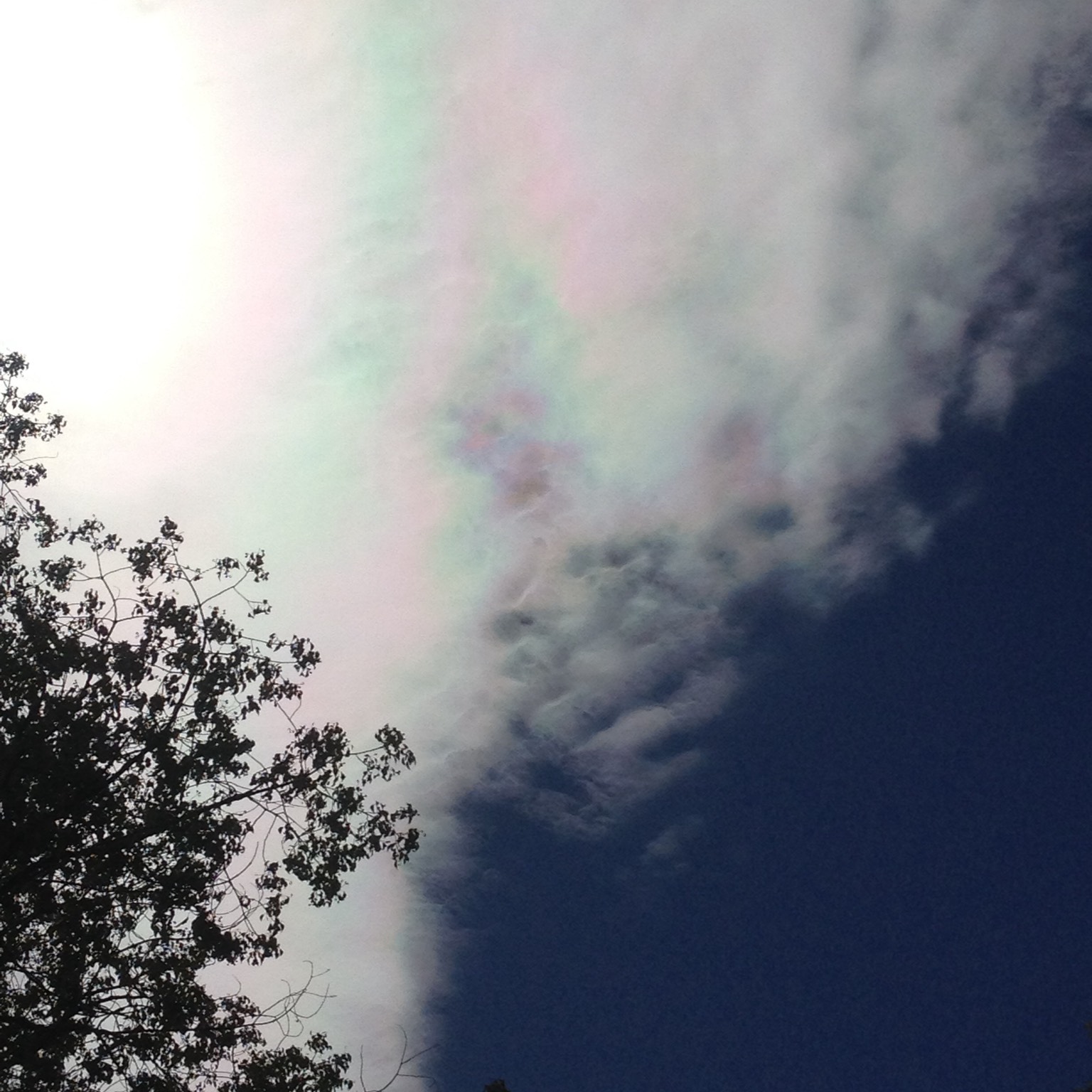 Iridescence is the beautiful effect of bands of pastel colours that can appear when sunlight or moonlight passes through thin cloud. Also known as ‘irisation’, these mother-of-pearl colours are caused by the light being diffracted as it passes through the cloud. It is the same process that gives rise to coloured discs around the Sun or Moon, called coronae. The light waves are dispersed as they pass around the cloud’s tiny droplets or ice crystals, with different wavelengths being spread out by different amounts. Each wavelength can also produce an interference pattern of light and dark fringes. All this means that the sunlight is separated into alternating fringes of colour.

Any thin cloud with droplets or ice crystals small and uniform enough can produce iridescent colours. Best viewed through Sunglasses, the bands of pastel hues are reminiscent of those on oil slicks, and can be seen over thin Stratocumulus, Altocumulus, Cirrocumulus and Altostratus. Nacreous clouds in the stratosphere, high above most weather clouds, show the most intense iridescence of all.

The colours can also appear at the edges of clouds thick enough to block much of the sunlight, such as lenticularis. To claim that every cloud has a silver lining is therefore wrong – some have tutti-frutti coloured ones. 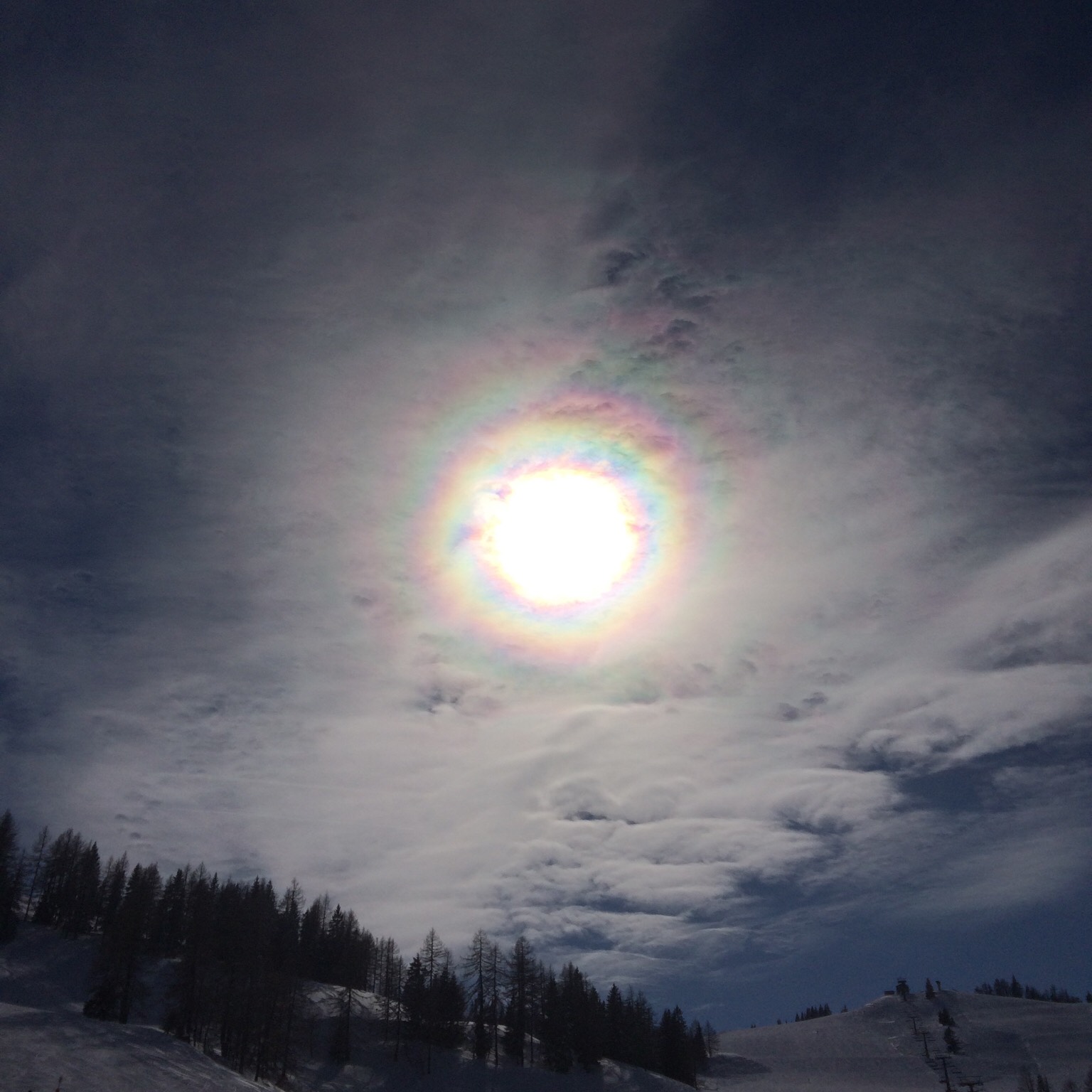 Look towards the Sun shining through thin cloud and you might find that it is surrounded by a corona. This is a bluish-white disc of light with a ruddy outer edge, often surrounded by rings of iridescent colours. CloudSpotters should be careful to protect their eyes by blocking the Sun with a hand. Coronae can be seen less painfully when clouds drift in front of a bright Moon.

Closely related to cloud iridescence, coronae are caused when the light is diffracted as it passes around a cloud’s particles. Only if these are all very small and the cloud layer is thin will the colours of the corona appear distinct around the central bright disc. The smaller the cloud droplets, the larger the corona.

CloudSpotters should take care not to confuse a corona with a 22-degree halo. Not only is the corona much smaller (the outer edge usually being less than 5˚ from the Sun or Moon – the width of three fingers, at arm’s length), it also has a bright central disc, or ‘aureole’, while the halo is just a ring of light. Nor should they confuse it with a glory, which appears in the opposite direction, looking away from the Sun.

Coronae can also be seen around car headlights viewed through a windscreen misted up with condensation. Anyone claiming credit for this is a terrible cheat. 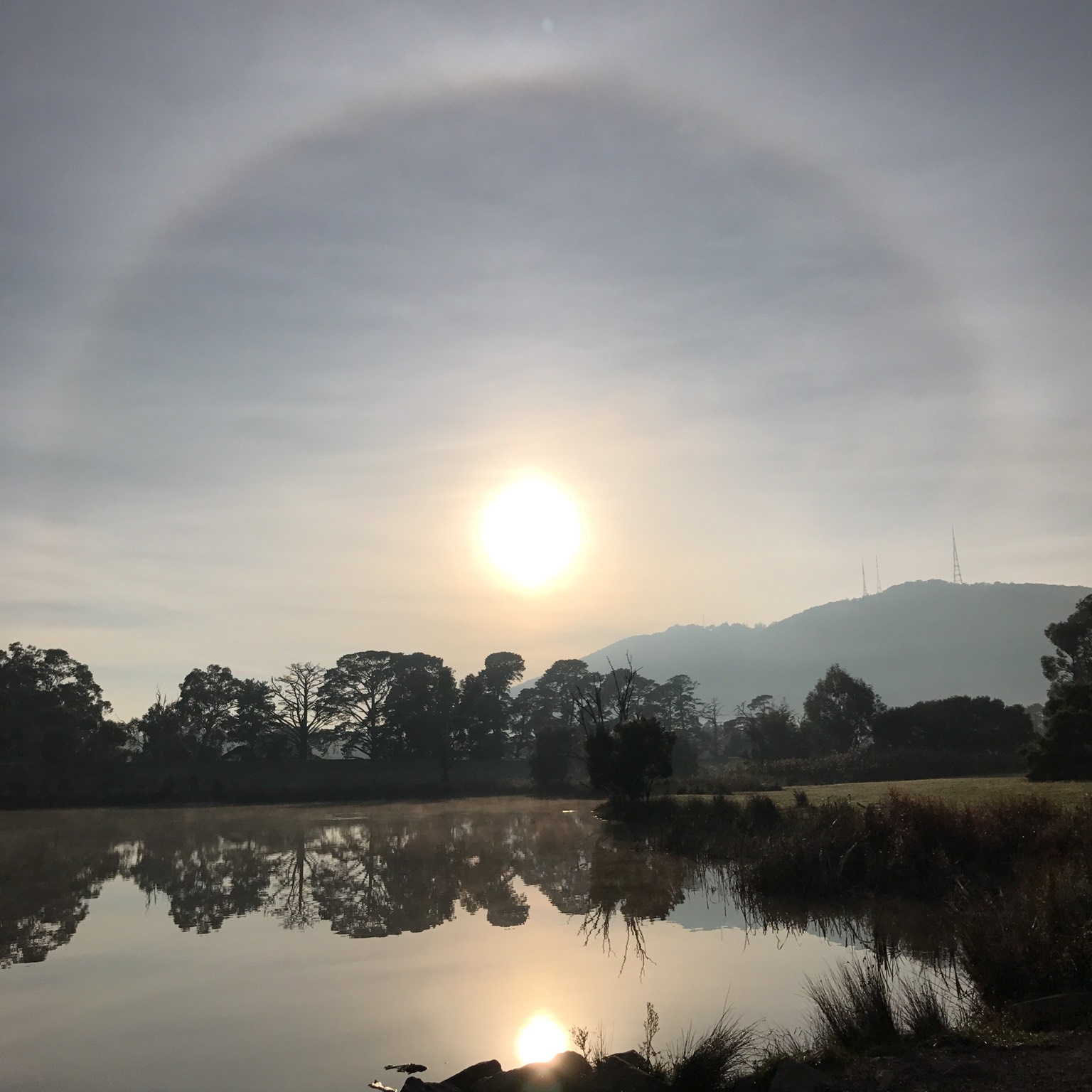 The 22-degree halo is the most frequent of the many halo phenomena that can appear as sunlight is refracted through the ice crystals of thin layers of high clouds, such as Cirrus, Cirrostratus and Cirrocumulus, or the ground-level ice-crystal cloud, diamond dust. Appearing on about 100 days of the year (in Western Europe), the 22-degree halo looks like a large ring around the sun or moon. Its inner edge generally has a reddish tinge to it, with the region of the sky between halo and sun appearing darker than that just outside the halo. When cloud cover is less than extensive, only parts of the halo appear.

CloudSpotters observing a 22-degree halo for the first time will be surprised at how much larger it appears compared with photographs. This can present challenges when trying to photograph one on your phone. The distance from sun or moon to the edge of the ring is equivalent to the outstretched span of a hand held up at arm’s length.

Though it’s worth two stars, a 22-degree halo is not worth screwing up your eyesight for, so take especial care never to stare directly at the sun. Be sure to photograph from the shade of a tree, lamppost or building in order to block out the sun itself, and reveal the part of the sky showing the halo.