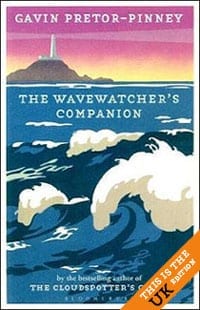 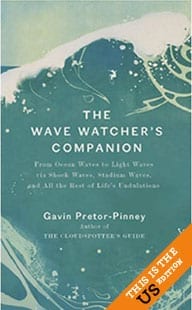 The Wavewatcher’s Companion (spelt ‘The Wave Watcher’s Companion in the US) is a new book by Gavin Pretor-Pinney, founder of the Cloud Appreciation Society. It explores all types of wave, not just the ones you find on the water – everything from sound waves to light waves, brain waves, Mexican (stadium) waves, waves of traffic, waves of emotion… in fact, all of life’s undulations. The ones we enjoy on the ocean may be the most obvious and visible, but they are just a tiny proportion of the waves that surround us every day. Many of them profoundly shape our experience of the world, even though we are largely oblivious to them. After all, everything you see and hear reaches you by means of sound or light waves. In fact, your very existence depends on waves, such as the muscular wave that spreads, with every beat, through the tissue of your heart.

The inspiration for this book came on an afternoon at the seaside when the sky was completely devoid of clouds. With nothing to gaze at above the horizon, there was no other option than to indulge in a little wavewatching and, well, one type of wave soon led to another. The Wavewatcher’s Companion does, however, feature a few of our fluffy friends. The atmosphere is an ocean of air, which experiences waves too – ones that are often beautifully revealed by the glorious forms and movements of the clouds. And so there are cameo performances by wave-cloud favourites, such as the lenticularis cloud and the rare and fleeting Kelvin-Helmholtz wave cloud.

It seems cloudspotting and wavewatching are not so different after all. Breaking waves actually play a role in the formation of some clouds. Storm clouds, conversely, produce the winds that form large ocean waves. If the clouds are expressions on the face of the atmosphere, waves feel like the breath of the ocean and, as such, are equally evocative in communicating its moods.

“Gavin Pretor-Pinney remains a uniquely brilliant guide to the natural world.”
The Mail on Sunday

“Like his previous book, this one employs a chatty, conversational tone, with clear technical explanations enlivened by real-world examples, whimsical asides, personal anecdotes and inventive analogies—all liberally peppered with historical and literary references to tickle the palate of discriminating bibliophiles.”
Wall Street Journal

“Perfectly paced… engaging to all”
The Financial Times

“A unique book”
The Daily Mail