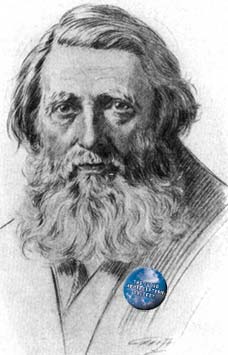 When it comes to the truth of the sky, the Victorian art critic and essayist, John Ruskin, said it all. For those not familiar with his work, we reproduce an extract below from his multi-volume Modern Painters.

It goes without saying that we have awarded Ruskin a posthumous Honorary Membership to The Cloud Appreciation Society. All we need now, as a fitting monument, is a photograph of a cumulus cloud in the shape of his likeness…

“It is a strange thing how little in general people know about the sky. It is the part of all creation in which nature has done more for the sake of pleasing man, more, for the sole and evident purpose of talking to him and teaching him, than in any other of her works, and it is just the part in which we least attend to her. There are not many of her other works in which some more material or essential purpose than the mere pleasing of man is not answered by every part of their organization; but every essential purpose of the sky might, as far as we know, be answered, if once in three days, or thereabouts, a great, ugly black rain cloud were brought up over the blue, and everything well watered, and so all left blue again till next time, with perhaps a film of morning and evening mist for dew. And instead of this, there is not a moment of any day of our lives, when nature is not producing scene after scene, picture after picture, glory after glory, and working still upon such exquisite and constant principles of the most perfect beauty, that it is quite certain it is all done for us, and intended for our perpetual pleasure. And every man, wherever placed, however far from other sources of interest or of beauty, has this doing for him constantly… the sky is for all; bright as it is, it is not “too bright, nor good, for human nature’s daily food,” it is fitted in all its functions for the perpetual comfort and exalting of the heart, for the soothing it and purifying it from its dross and dust. Sometimes gentle, sometimes capricious, sometimes awful, never the same for two moments together; almost human in its passions, almost spiritual in its tenderness, almost divine in its infinity, it is surely meant for the chief teacher of what is immortal in us, as it is the chief minister of chastisement or of blessing to what is mortal. And yet we never attend to it, we never make it a subject of thought…”